And this is something I never expected.

It means that there are lots of folks running English version of the Windows, but have needs to run some Non-english version of software. In some cases, very often. If you are international students like me, or just happened to purchase a computer with English Windows installed on it, but need to use some unique legacy software on your own language, this will be the case.

I am writing this additional post, because I want to let you know that AppLocale is not the only way to run Non-English software on your English Windows.

As being a Chinese, I’ve been using English Windows since 2002. What I’ve done to force my English Windows to use Chinese software is by changing this “System Locale” into Chinese (Simplified).

It is under (in Windows 7’s case), Control Panel –> Region and Language Settings –> Administrative Tab. 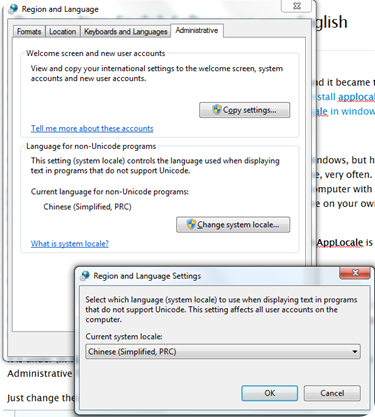 Just change the option value of “System Locale” into whatever language you want. Reboot the machine, Windows will become that particular language version. [Not to confuse this with Multilanguage (or Multilingual) Interface Pack. (Multilingual Interface Pack is a special package usually sold separately to change your Windows Interface into specific language.)] After change the system locale, all menus and buttons will remain the same. But you can consider your system as that particular language from that moment.

Here is an  ex ample.

You see that menu is in English, but the Chinese Program runs like a charm? 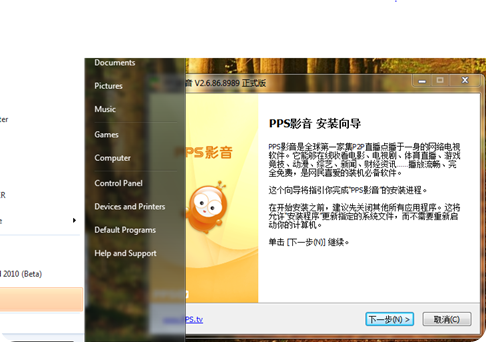 AppLocale is originally designed for software developers who work on one or two software that are different with their Windows OS language. Therefore it was not intended for “civilian use”. If you only use one or two software, and works pretty fine with AppLocale, you can keep using it. But if it doesn’t, there is really no clear answer for every situation. Especially it appears that update on AppLocale from Microsoft has stopped since 2003.

I ended up using AppLocale, because of special occasion of mine. I use AppLocale for iTunes 9 only. I am a Chinese, but with first language in Korean. I have huge amount of MP3s in Korean, all tags of MP3 will be ill-displayed if I switch “System Locale” into Chinese. But I can’t switch it into Korean, because most majority of my works will be in Chinese. I had to find a way for that. AppLocale was the solution.

If I have to make a conclusion at this point,

1) Change your “system locale” if you want your windows to support only one additional language.

2) Consider AppLocale if you need more than two additional languages.